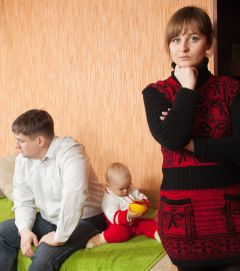 Results from a long-term study suggest high levels of family stress in infancy are linked to differences in everyday brain function and anxiety in teenage girls.

The University of Wisconsin-Madison study provides evidence for a developmental pathway through which early life stress may contribute to brain changes.

Researchers discovered babies who lived in homes with stressed mothers were more likely to grow into preschoolers with higher levels of cortisol, a stress hormone.

Interestingly, young men in the study did not show any of these patterns.

“We wanted to understand how stress early in life impacts patterns of brain development which might lead to anxiety and depression,” says first author Dr. Cory Burghy.

“Young girls who, as preschoolers, had heightened cortisol levels, go on to show lower brain connectivity in important neural pathways for emotion regulation — and that predicts symptoms of anxiety during adolescence.”

To test the hypothesis, Dr. Rasmus Birn used a new method of functional magnetic imaging (resting-state functional connectivity (fcMRI)), which looks at the brain connections while the brain is at a resting state.

Brain scans showed that teenage girls whose mothers reported high levels of family stress when the girls were babies show reduced connections between the threat center of the brain (the amygdala) and the part of the brain responsible for emotional regulation (the ventromedial prefrontal cortex).

The study is being published today in Nature Neuroscience.

“This will pave the way to better understanding of how the brain develops, and could give us insight into ways to intervene when children are young.”

For the current study, Burghy and Birn used fcMRI to scan the brains of 57 subjects – 28 female and 29 male – to map the strength of connections between the amygdala, an area of the brain known for its sensitivity to negative emotion and threat, and the prefrontal cortex, often associated with helping to process and regulate negative emotion.

Then, they looked back at earlier results and found that girls with weaker connections had, as infants, lived in homes where their mothers had reported higher general levels of stress – which could include symptoms of depression, parenting frustration, marital conflict, feeling overwhelmed in their role as a parent, and/or financial stress.

As four-year-olds, these girls also showed higher levels of cortisol late in the day, measured in saliva, which is thought to demonstrate the stress the children experienced over the course of that day.

Near the time of the scan, researchers asked the teenagers about their anxiety symptoms, and about the stress in their current lives.

They found a connection with childhood stress, rather than current stress levels. This suggested that higher cortisol levels in childhood could have modified the girl’s developing brain, leaving weaker connections between the prefrontal cortex and amygdala — an association that explained about 65 percent of the variance in teenage anxiety levels.

“Our findings raise questions on how boys and girls differ in the life impact of early stress,” says Davidson, who calls the disparity unsurprising.

“We do know that women report higher levels of mood and anxiety disorders, and these sex-based differences are very pronounced, especially in adolescence.”

Davidson says the study “raises important questions to help guide clinicians in preventive strategies that could benefit all children by teaching them to propagate well-being and resilience.”

Essex notes that some of the recent results also answer questions raised when the newborns were enrolled a generation ago.

“Now that we are showing that early life stress and cortisol affect brain development,” she says, “it raises important questions about what we can do to better support young parents and families.”

(reprinted with permission from PsychCentral)