Happy New Year! How to Make this a Great Year (Without the Pressure) 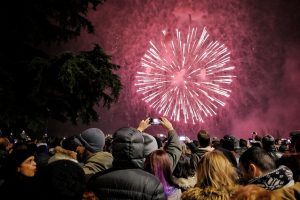 January is a complicated month. Starting with a flourish, fancy bits of bling and the banging of pots and pans, January opens the door to a world of possibilities and gives us a lift. But just as we’re feeling the glory of that lift, something else happens. Little voices sneak in. And they aren’t exactly wishing us a happy new year.

You can’t keep your resolutions, it’s not going to work! How is this going to be a great year? You’ve already blown it! Maybe these aren’t even the right resolutions! Suddenly the wind isn’t so much at our backs. It’s blowing right in our faces. The pressure to live up to January’s expectations for us is great. January, it appears, can be very judgmental.

Fortunately, January is not the problem. It’s us.

If we’re making resolutions that don’t match reality, reality isn’t the moving part, but we are. How we respond to the dynamic duo of doubt and fear is the clincher. No need to burrow into the couch in our pajamas with our pint of Haagen Daz waving the white flag in surrender, but nor do we need to spit in the proverbial eye of January and insist that we are going to make this a great year, in fact, the greatest year ever. If we want this to be a great year, we have to expect that fear and doubt are the universal party-crashers, but we needn’t give them more attention than the invited guests. But, the more pressure we put on ourselves for things to be perfect or great, the more likely fear and doubt will come sauntering in. So, while you’re making your plans and resolutions, make sure you leave a little breathing room for your sanity. Your sanity will thank you. Generously. Here are four quick steps to help you be successful with that project.

We may want to make big changes this year. But then, because we don’t know exactly how those changes will turn out, we start to fill in the blanks with far out worst case scenarios. Just because those scenarios frighten us doesn’t mean they are real. There is no monster under the bed, I’ve checked. Fear and doubt are universal first reactions to uncertainty. Instead of giving them authority over your life, think of them as neurological rumor mongers creating an attention-grabbing story out of thin air. Don’t perpetuate the rumors, investigate them.

Expectations: Control What You Can

There’s an old saying that man wants to be an overnight success, and he wants to sleep well that night too. We want to see results now. But insisting on that tight timeline may lead us astray. When we don’t hit the deadline we may misinterpret that as a sign of failure, rather than a sign that the results just haven’t happened yet. Safeguard yourself from this risk by making your expectations about things you can actually control. For example, instead of saying: I need to get a job by March 1st, say: I am going to spend five hours each week networking and three hours writing cover letters and resumes between now and March. That’s something you know you can do.

With so many big ambitions, why do we find so many reasons to play farmland on facebook? We’ve frightened ourselves off with the big dreams we envision for ourselves. Big dreams are fine, but then we must think small and work small. Make your goals attainable. Break down the big goal into smaller goals that you’ll reach early and often. Watch the momentum build.

You’ve heard of having a gym buddy for those “misery loves company” early morning trips to the treadmill, don’t stop there. Want to be more grateful—find a mate to share your gratitude findings with each week. Need a boost starting to date again or cleaning out closets? Do a barter. Everyone has some project that would benefit from a little help from our friends.

Let’s do this together. Let the expectations be flexible and focus on what you are doing rather than what you aren’t and would like to be. Great journeys, and pretty good ones, too, do begin with a single step, but we’re going to be more willing to take that step when we’re not telling ourselves it needs to be great. We aren’t stepping on to that great stage of life, we’re just walking, maybe even in our slippers.