Code Like a Girl: Learning to Code without Fear 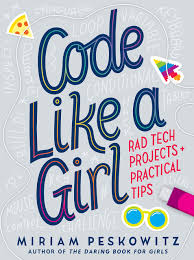 Raise your hand, do you have math anxiety or tech anxiety? When you think about math or STEM (Science, Technology, Engineering and Math) do you break out in a cold sweat and say to yourself—that’s absolutely 100% not for me? Anxiety with all things numbers is very common, but especially common among girls. Why is that? Does this come from an actual wired-in math deficit in girls? Something different about girls’ brains? Nope and nope. Researchers looking back at decades of math anxiety found repeatedly that while girls view themselves more negatively and anxiously than their male counterparts when it comes to math, in terms of their ability to apply math skills successfully… wait for it… there are no differences.

Still, math and computer science have historically been male-dominated fields, and the more that girls feel excluded and sense that they are not viewed as capable of excelling in those areas, the less they will try, and this bias and self-fulfilling prophecy will persist. But raise your hand again, when you think of your daughters and granddaughters, wouldn’t you love for the future to be written by women and men alike? Being the mom of two daughters, I say yes and I have good news for you, a new book, Code Like a Girl, by the intrepid Miriam Peskowitz, who brought us The Daring Book for Girls and The Double Daring Book for Girls, is here to level that playing field. Miriam explains that when it comes to “coding” which she demystifies with the simple definition: “directions we use to tell machines what to do,” we need all hands on deck—or shall I say, on keyboard. Because coding, Miriam tells us, is really about solving problems and we need everyone’s creativity to do that best. We could have no better guide to welcome girls into the world of coding, to take their hand, and walk them through step-by-step the adventure of how do write code. Are you worried that it will be too hard? Too confusing? That’s OK, you just need to open the book and very quickly you’ll see that you can do it! Please do! If you need more encouragement, Miriam tells us that research has found that coding companies may even prefer code written by women.

As an anxiety therapist, I know that the best teacher is a wise, friendly person who understands how worry, perfectionism, and simply not feeling “good enough” or “smart enough” can interfere with our ability to learn. Miriam, whom I count my lucky stars is one of my closest friends, encourages girls by explaining that the process of learning how to code is not different from other skills they know, they just need to spend some time practicing, desensitizing, and getting familiar and all along the way this can be a fun adventure! Also as an anxiety therapist, I know that math anxiety or anxiety about learning is greatly multiplied by feeling rushed, pressured to perform, or to not embarrass yourself by stumbling or making a mistake in front of others—which is why I especially love the fact that now there’s a book that readers can take home and learn coding skills on their own, at their own pace, or even with a supportive group of friends.

Today, technology accelerates nearly every aspect of our experiences in life and as parents—we know that to compete, to keep up, our kids, especially our daughters, need to feel welcomed into the world of tech because that’s increasingly (by the minute!) how change is happening in the world. How do we help girls know that the doors of tech world are open to them—when most of the people inside that door are male? And more importantly how do we help girls have the confidence and skills to open those doors themselves if they look closed? In Code Like a Girl, Miriam walks readers through exactly what they need to learn. Full of illustrations and very clear step-by-step instructions to crack the code—of code. Miriam is also savvy about the challenges that girls face with tech: discouragement from others, the struggles of “being the only girl in the room” in a tech class, and helps girls know that they are not alone. But there is a broader agenda of connection across lines of humanity: Miriam is here to make friends. She explains that a lot of times guys in tech who seem stand-offish might just be shy or awkward, and if you reach out they may be very happy to talk and find common ground. One feature that I especially love is that Miriam ends every chapter with an encouraging letter to her readers. Going beyond the skills, Miriam helps girls know that the world of coding is for everyone. Miriam will instantly feel like a great friend and role model to your daughter.

This book is so needed, especially now, because the myth that girls and women are not as good as boys and men at math, or machines, or computers, or tech, creates a barrier and self-fulfilling prophecy for girls about math. And it’s just a myth. Miriam wants to help close the tech gender divide for many reasons—we need all the problem-solvers we can get in these complex times. But also, tech skills are one of the fastest ways to increase earning potential. According to a coding boot camp, graduates doubled their earning after acquiring coding skills.

There are so many strong girls and women in the area of math in history, check out these game-changers.  One of my favorites is the great, Katherine Johnson, her story told in the film Hidden Figures and in the book, Reaching for the Moon. Katherine not only stood up to discrimination based on gender, but also race. As a math prodigy, Ms. Johnson’s father had to drive her 120 miles to school because in the 1920’s there was not math education for Black students in West Virginia beyond 8th grade. To boot, Katherine had the smarts to graduate high school at age 14 and college at 18! As a mathematician her work in orbital mechanics at NASA was critical to the success of the first space U.S. spaceflights.

There are ordinary heroes in math and STEM class every day, but they might not know it…yet. So if you have a daughter, granddaughter, or want a great resource for your friends or students—please check out Code Like a Girl and begin to change a girls’ life—by getting them into the club of coding. Actually, scratch that, give her the tools so she can make her own club and invite everyone else in, because according to Miriam coding really is about working collaboratively in groups and changing the world! As Miriam said in a recent interview, “I really want to make space for everyone who hasn’t been in tech.” And she’s doing just that.

So let’s get the fear and anxiety out of tech, open the cover of Miriam’s book: Code Like a Girl and step in to a new world– your new world. And while we’re at it ridding the world of tech anxiety: for ideas about overcoming math anxiety: check out my latest blogpost about that. Here’s to the problem-solvers of the future and making room for everyone in tech.