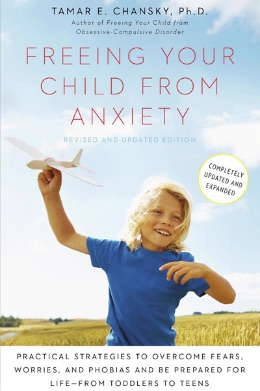 Practical Strategies to Overcome Fears, Worries, and Phobias and Be Prepared for Life—from Toddlers to Teens

Back by popular demand, Dr. Chansky has completely revised Freeing Your Child from Anxiety, one her best selling books used by thousands of educators and parents alike.

Childhood should be a happy, carefree time. Yet too many children are stressed-out and exhibiting symptoms of anxiety. In Freeing Your Child from Anxiety, childhood anxiety expert Dr. Tamar Chansky shares a proven approach for helping children build emotional resilience for a happier and healthier life.

Parents everywhere want to know: What is normal? How can you know when stress has crossed over into a full-blown anxiety disorder? How can you prevent anxiety from taking root? And how do you help your son or daughter break free from a pattern of fear and worry and lead a happy, productive life? Fortunately, anxiety is very treatable, and parents can do a lot to help get their children’s emotional well-being back on track.

Freeing Your Child from Anxiety contains easy, fun, and effective tools for teaching children to outsmart their worries and take charge of their fears. This revised and updated edition also teaches how to prepare children to withstand the pressure in our competitive test-driven culture. Learn the tips, techniques, and exercises kids need to implement the book’s advice right away, including “How to Talk to Your Child” sections and “Do It Today” activities at the end of each chapter. These simple solutions can help parents prevent their children from needlessly suffering today—and ensure that their children have the tools they need for a good life tomorrow.

How to Explain Worry to Your Child — Ping the Problem on the Problem: It’s Not Your Child; It’s Not the Situation; It’s the Tricks that Worry is Playing

“I can’t help it; something in my mind won’t let me try it.” —­ A six-year old child with anxiety

“I’ve lived through a thousand tragedies, none of which actually happened.” —­ Mark Twain

Don’t worry, everything’s fine, don’t be a worrywart.” Reassuring, cajoling, convincing, bribing, even picking up and dragging, these are the tactics parents use when their child is scared. The pressure is on: How do I get my child to do something that is clearly safe, but of which she is afraid? As parents we are trying to convince our children to “stop” worrying and just do it; meanwhile, worry is pulling the rope the other way, convincing them that they can’t and shouldn’t.

How do you win? Or not let worry win? Or get on the same team as your child? Rather than trying to get him to just “stop being afraid,” you are the one who can explain that the “some- thing” that is getting in the way is called worry, and it’s not to be trusted; rather, it should be tested. If, with your guidance, your child uses his smarts to prove worry wrong, you are no longer in the business of reassuring and convincing—which you’ve already witnessed doesn’t work for anxious kids. Instead, you can support your child in taking actions that are in line with his new, more accurate understanding of the situation, that is, reality.

Your child is scared not because of the situation itself, but be- cause of the big, scary looming picture worry has created in his mind, the misinformation his first responder, the protector brain, is providing for him. The quick assessment the amygdala is making is to run—and he’s outta there! But wait, he’s really in a Mark Twain moment—failing the test, being knocked over by the dog, being tongue-tied in front of the class, throwing up at school— they’re only happening in his mind. When he says, “I can’t!” his body and emotions are synched perfectly with the picture in his head, but not at all connected to reality. But if you just tell him, “It’s fine, you’re safe,” your child is not convinced. He might even be more confused. Why are you getting mad at him for being scared when he’s already so upset?

Rather than addressing your child by asking, “Why are you worrying?,” pin the problem on the problem: Worry is playing tricks, making things feel dangerous that are really safe. Instead of telling him what to think, ask your child questions to help him discover the truth for himself: “What is worry telling you about this? What do you think is true? Does that sound right to you? Do you think that is really going to happen, or is it just scary to hear that idea?” When parents pose questions this way, it is a great relief for children. They get to see their worry at a distance, and have their opportunity to “tell on worry” rather than feeling responsible or blamed for what worry is telling them.

If we want to help children be unafraid to participate in their lives, first we need to change the picture in their minds to make it more accurate. I call this strategy: “shrink and approach.” Don’t try to convince your child not to worry. He has a picture in his mind, and he’s using it as a reference point. Help him to correct (shrink) that picture, and he will be convinced all by himself that he need not be afraid. Then, seeing things more accurately, he’ll be willing to approach the challenge. By asking the right questions, getting him thinking differently about worry, he will be able to turn the mountain back into the molehill. This is how we teach a child to outsmart the tricks his mind can play.

The great thing about this strategy is that it’s 100 percent do-able. We don’t need to change school, dogs, or book reports! They are fine as is. Your goal is to get your child to take another look before he assumes that he’s in a dangerous or impossible situation. Rather than letting his primitive protector brain decide if a play-date, a test, or riding the school bus is safe, he needs to give the job to the right part of the brain—his smart brain.

Teach him to take the elevator up to the top of his head—to the cortex—and take a second look at the situation from the thinking part of the brain: “Your worry is saying x. What do you really believe is going to happen, and why?” Don’t be afraid to challenge worry’s authority when talking to your child. You want to teach your child to expect worry, but also to remember worry’s terrible track record. It’s always wrong. Instead of saying, “Don’t worry!” say: “Of course worry would say something like that,” or, “That’s exactly what worry would tell you, but if worry took a test in school—would worry be right, or would worry get all the answers wrong?” These kinds of questions help your child to pause and fact-check what worry is saying and shift the picture in his mind from the worry picture to a picture that is more accurate.

...the master of providing clear, accessible, practical advice and guidance for wise and loving care of the anxious child.
Jeffrey M. SchwartzM.D. author of Dear Patrick: Letters to a Young Man, Brain Lock, and The Mind & The Brain
Freeing Your Child from Anxiety is an excellent book, one of the best of its kind.
Judith S. BeckPh.D., University of Pennsylvania
Previous
Next