7 Ways to Cope with Family Stress During the Holidays 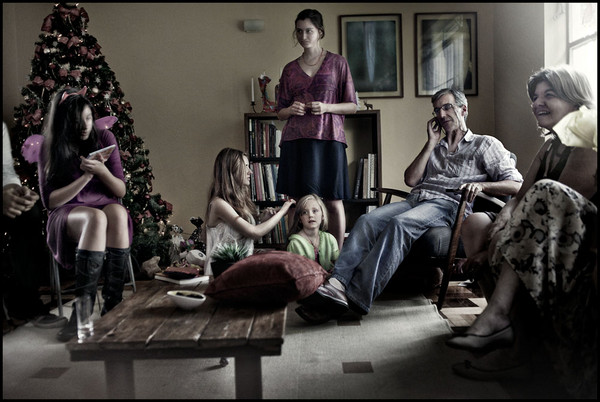 Ah, how magical to celebrate the holidays with family. Oh, wait… really? With… family? @&%#!, with family?!

You don’t have to guess who’s coming to dinner. You know the cast of characters well: It’s the uncle who embarrassed you when you were 5, 10, 20, and counting, the sister who always had better clothes than you and always will, the brother-in-law who can’t understand why you would want to work for a non-profit, and the aunt who says, “Are you still single?” and makes that face like she’s eaten something bad.

It’s a party. It’s a zoo. It’s your relatives. You go in with an open heart, and they do surgery.

Quickly, the Norman Rockwell family warmth around the holiday table degenerates into a Salvador Dali remix. The hardest part? Nobody else seems to notice but you: the proverbial knife in the back instead of in the turkey, the pie in the face rather than on the buffet. Oh how common are these mixups this time of year!

You emerge from these “happy” occasions demoralized or in a red-hot fury, plot your revenge, schedule an extra appointment with your shrink and talk about your family the whole way home. You are incredulous. They gotcha again! “Again?”

It doesn’t have to be this way for you.

What exactly are you incredulous about? People being themselves. Exactly as they’ve always been, year after year. Why is it so hard to live with the way people are? Because we can’t accept it. Because we want them to be different.

Surprise! They are still the same. Surprise again! So are we.

As Albert Einstein once said, the definition of insanity is doing the same thing over and over again and expecting different results. (Hmmm… wonder how he got along with his family?) This year, do yourself a favor — if you want to thrive (and not lose your mind) during the holidays, give yourself a gift: Expect what’s most likely to happen. If you’re wrong and things go great, all the better! But if you’re right and history repeats itself, no harm, no foul, no 19th nervous breakdown.

Here are some more ideas for keeping yourself safe and sane during family gatherings:

Be the Moving Part: In Your Mind
If we can’t change other people, if they’re just plain unwilling to budge, we can make the move and adjust and adapt to what we expect of them — not to let that other person off the hook necessarily, but for ourselves. Expect the expected, or expect nothing. You had your life and everything you needed before you stepped into the gathering, and it will be waiting for you at the other side of it, too. Whatever happens in between does not change that fact.

Get Up, Stand Up: Be the Moving Part, Literally
The more something bothers you, the more you focus on it. Like chewing sounds or popping jaws, the more you notice it and decide that it’s noxious, the less you are able to wrestle your attention from it. Decide it’s not noxious (we don’t take jackhammer or lawnmower sounds personally, it’s just their nature). Get up, sit somewhere else, and focus on a new conversation.

Don’t Personalize It
Yes, some people are out to get us, but often, even then their mission comes from issues that long proceed us and are like a movie being projected on your screen. You are not the only theater where that film is showing. There’s a broad distribution. People usually are not even setting out to try to drive us crazy. Usually the people that drive us batty are just doing the best they can, stumbling carelessly, mindlessly, or maybe even because they are trying to help and think that they are doing a great service as the self-appointed emcee “offering” their humor — for free!

It’s Business, Not Pleasure
Decide that this gathering may not be the warm-fuzzy of your holiday season, it may be more the “work” portion of your holiday, and plan some other activity that you know will be more satisfying and like “play” to you. Think: I don’t need this be the best night of my life. I can get my needs met elsewhere. Again, if you are wrong and you end up enjoying yourself, what a delightful mistake you’ve made.

Have Compassion: Round Up Rather Than Down
You can pretend you get along, or lament that you don’t, or play the blame roulette. It’s your fault, it’s their fault. Or… You can let it be. Instead of wishing that person ill, imagine the reasons why someone might act that way when it is frustrating to others. Put yourself in their shoes. Maybe it’s hard for them to be living this way. Maybe there are good reasons. Round up: Maybe that person doesn’t want to be the bad guy. Maybe it’s all he knows how to do, or it’s the best he can do in the moment. Throw him a rope with humor, give him the chance to do something better (or different, anything different would likely be better).

Give Rather Than Receive
If you knowing going in that you’re not likely to get your emotional needs met from this crowd, consider doing a 180. Maybe this is your moment to be generous and bring the cheer and spread it around. You’ll leave knowing that you made a contribution to the greater good.

Count on Yourself to Keep Perspective
Though you can feel that these gatherings are interminable and unbearable, remember, the night will end, and you will go home. This isn’t your whole life, it’s just one slice (or sliver) of a big pie: It’s just your life there. Think of the many other facets of your life that you value. Maybe you have a “chosen family”: friends, coworkers, whose presence in your life you appreciate all the more, courtesy of this moment. And remember, one bad apple doesn’t spoil the whole bunch. Maybe it’s not everyone in your family who is driving you crazy, maybe it’s just some of them — or more often, it’s just one lone person who rubs you the wrong way. Compartmentalize. Contain the spill, and enjoy everything and everyone else around it — you’re allowed.

Maybe these were lessons that Norman Rockwell’s family understood. And if not, well, Salvador Dali’s holidays, we can imagine that they were a lot more lively and made for much more interesting conversation on the car ride home. Happy (sane) holidays to all!